The analysis of lipid residues preserved for millennia within the porous matrix of archaeological ceramics, originally used as cooking or storage vessels, enables the reconstruction of past food resources way beyond the era where written records provide information. It therefore offers insights into past peoples’ lives that would remain hidden otherwise. From the viewpoint of an Analytical Chemist these samples are extremely interesting and challenging due to their very nature: The lipids are most likely a cumulative signal of thousands of different cooking events (including different resources) which then have been altered both by abiotic and biotic processes over thousands of years. It is sometimes hard to believe that we can still find traces of lipids– often 5 – 100 µg per gram ceramics, sometimes several mg – in the majority of sherds, analyse these and derive valid and robust interpretations from them. 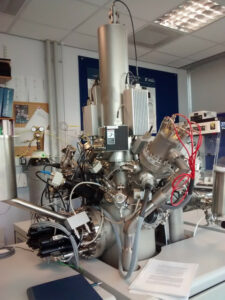 I was particularly fascinated by this, as I had not “grown up” in archaeological chemistry but got into the field as a Postdoc, after doing my PhD research on the analysis of lipids in (more contemporary) food. When I started to read up on the topic I was always looking for that reference that explains how this preservation actually worked, illustrated with some nice experimental data. However, that one reference remained elusive and I realized that there actually is not much experimental data directly on this. There is a whole set of very nice degradation experiments, where sherds containing lipids were incubated separately under oxic and anoxic conditions and the degradation of lipids species was assessed by taking samples after certain time points, extracting the lipids and analyzing them by GC-FID, GC-MS and GC-C-IRMS (I have done the very same to follow the degradation of cereal-specific lipids). Yet, none of these experiments really took a pro per look at how the lipids are actually incorporated into the inorganic ceramic matrix and how they are distributed in there. I should say there were reasonable hypotheses claiming that the lipids would become trapped in nano- or micrometer sized pores in the matrix and thus become protected from ground water leaching and microbial degradation. This made sense, as pottery that is fired at too high temperatures has a vitrified structure lacking this porosity and rarely yields any lipids. Still, there was no experimental data to really support or challenge this hypothesis.

A few months after starting in Bristol (Summer 2016) I began with plans to really look into this and quickly decided that Mass Spectrometry Imaging was the way. After talking to some people in Bristol it turned out we didn’t have the ideal instrumentation (samples not amenable for MALDI), but it got clear that Secondary Ion Mass Spectrometry (SIMS) could be the ideal technique – very high spatial resolution, good sensitivity and can be used for non-conducting samples (Figure 1). Searching for instruments of this kind in the UK I found the facility at the University of Nottingham, got in touch with them, and they were incredibly kind to invite me to come up to test if this could work (not surprisingly, lipids in archaeological ceramics is not one of their common applications). 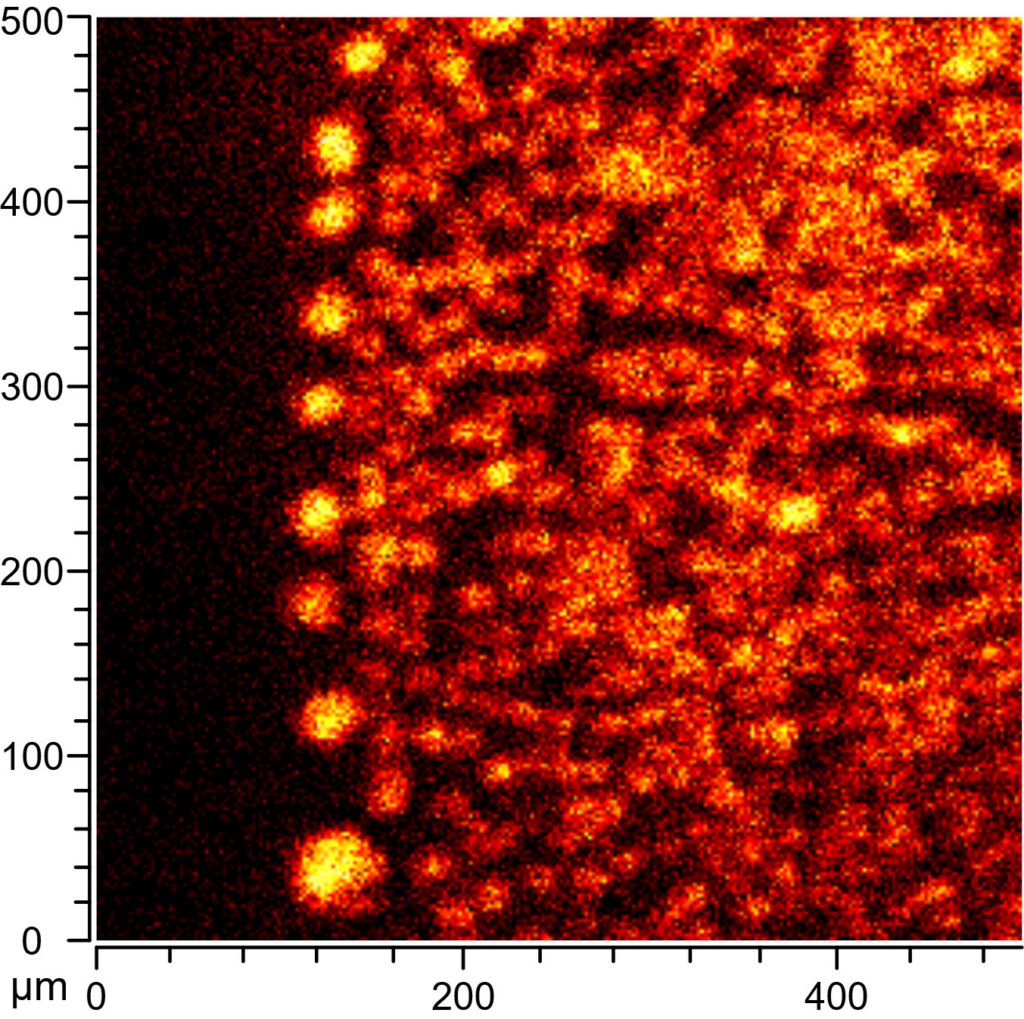 So, in February 2017 I went up there for a few days analysing standards, reference ceramics and a real archaeological sample as well as having an unforgettable experience going out for dinner by myself on Valentine’s Day (story for another day). The tests with lipid standards dosed on aluminium foil (simple background) and blank reference pottery were very promising, and produced nice data and even nicer pictures, with my favourite being the beautiful droplets of a C22:1 fatty acid (see Figure 2). Unfortunately, when it came to analyzing the wall cross-section of a real archaeological sample we couldn’t see any lipid signals at all (despite selecting a sample from a sherd that had previously been analysed by solvent extraction and therefore had a known and relatively high lipid content). We thought this was mainly due to the rough, uneven surface, which made focusing the primary ion beam as well as the secondary ions rather difficult.Never mind that small set back, really happy with the first tests I was very excited about my results, and so was everyone I proudly showed the data back in Bristol. I was sure that the initial problems could be overcome with some optimization of sample preparation. Following that I then set out to find funding for a few solid days of instrument time to go back to Nottingham and analyse more archaeological samples and finally see the lipids in there. After some time and a rejected small-grant application I luckily got a three month research fellowship awarded by the Gerda-Henkel Foundation in 2018 for a research project that (among other really nice work – watch this space) allowed me to continue my SIMS imaging work. When I got in touch with the guys up in Nottingham to tell them the good news and schedule the experiments it turned out they had just been awarded a large instrument grant which meant they would soon be the first university facility to set up a new generation of SIMS instrument with both a time-of-flight and an Orbitrap mass spectrometer as analyser (Figure 3). 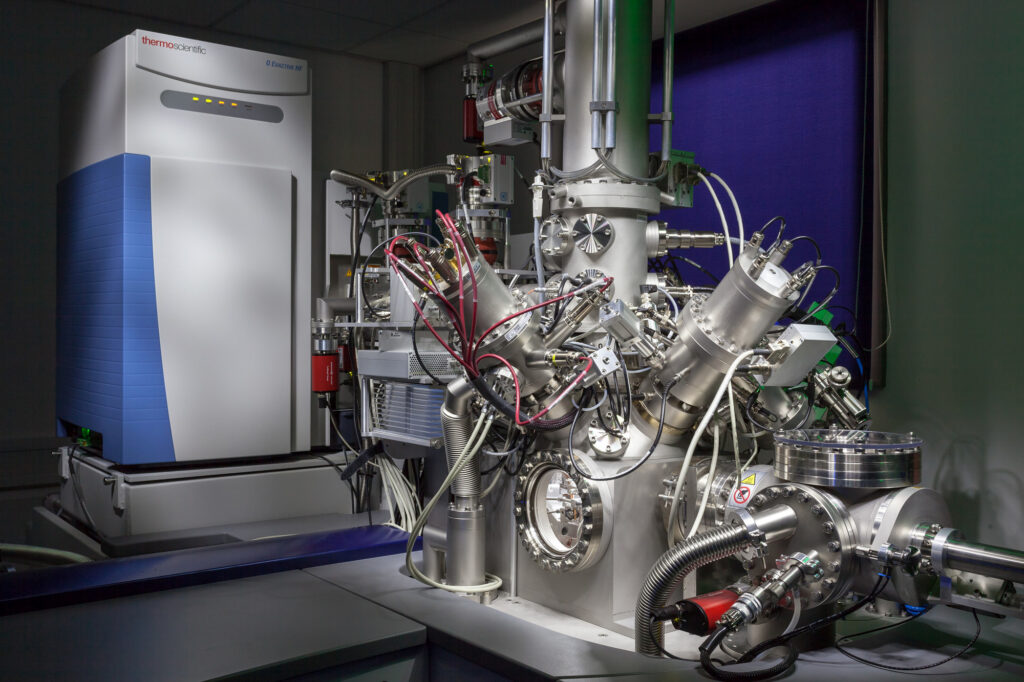 Considering the difficulties we had with “real” archaeological samples during testing I was more than happy to ac cept their suggestion to wait a bit and use the new instrument instead of the “old” one, as we had originally planned to. I was absolutely thrilled when I went back up, because this time we managed to collect brilliant data from the archaeological samples (Figure 4). This was probably partly because I made sure to select samples with exceptionally high lipid contents, and partly because the new instrument was also much better equipped to deal with the uneven surface of the ceramic samples. We did observe lipids in all of the archaeological samples, but in larger accumulations and zones than we anticipated – instead of isolated, micrometer-sized signals we found zones of lipids up to 400 µm in size in some samples.

When I came back to Bristol and sat down with the data I realized that, although I really loved the data, it wasn’t quite the end of the story. Particularly that observation of lipids accumulating on large white inclusions in the ceramics (inclusion visible by naked eye in Figure 5, top right) was something to follow up on. I took my samples to the Electron and Scanning Probe Microscopy Unit in the School of Chemistry and had a look at elemental composition through SEM-EDS. We had quite a good idea through the SIMS data already and the EDS data confirmed our initial thought that the inclusions were calcium carbonate, which is quite commonly found as temper material in pottery. Reading up to figure out what this could mean I found a nice (geochemical) paper where the author showed that calcium carbonate in presence of excess of fatty acids reacts to form fatty acid calcium salts. And this made a lot of sense to me for several reasons.

First of all, calcium fatty acid salts are extremely poorly water soluble (if you ever tried to clean soap scum off your bathroom tiles you’ll know this), which would make them less mobile through water leaching. Secondly, there has been an observation that using a protocol based on sulfuric acid in methanol frequently yields vastly more lipids (transesterified in this case) from archaeological ceramics than the “classic” method based on extraction with chloroform and methanol. Again, thinking of soap scum, the calcium salts of fatty acids dissolve under acidic conditions, and are therefore amenable using this method, while they are only very poorly soluble in chloroform/methanol mixtures, and this could therefore explain this offset. And when tested on another sample from the same sherd the sulfuric acid/methanol method did yield an incredible additional 47 mg/g (!)of lipids compared to solvent extraction. 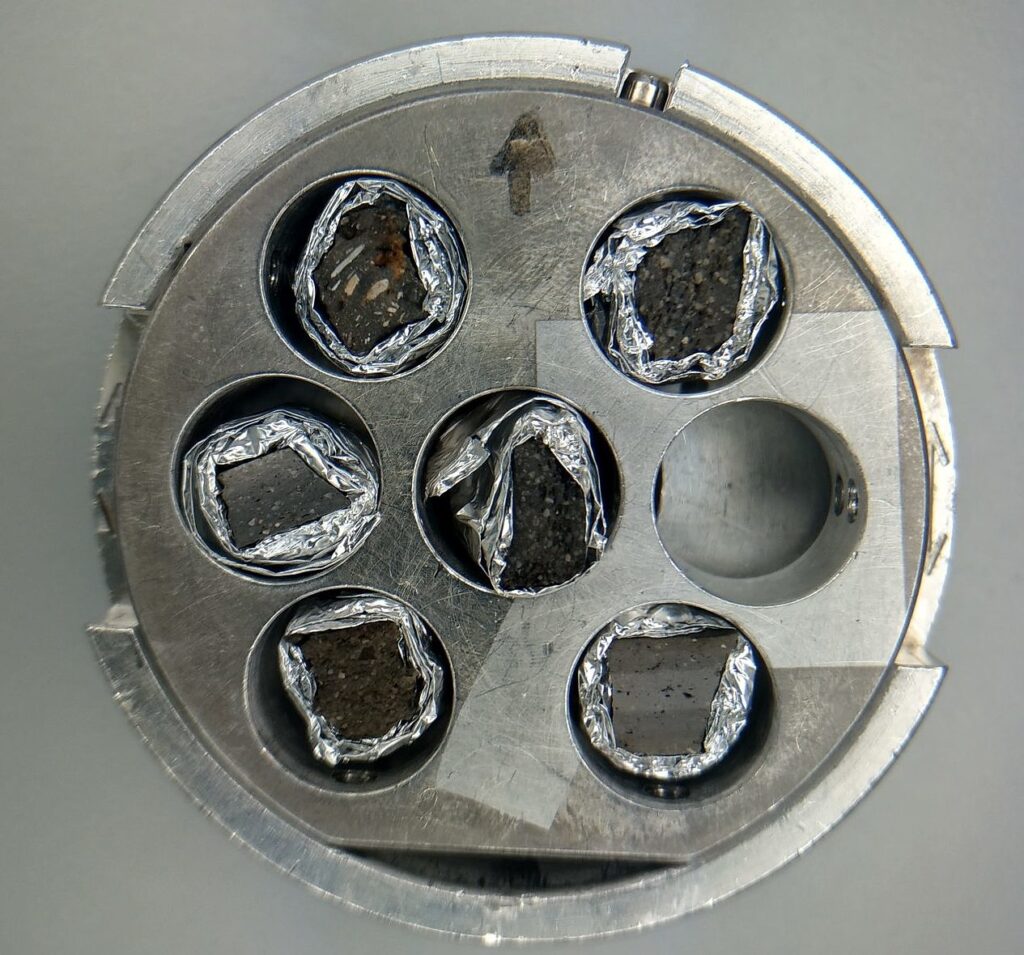 Figure 5: The sample stage for SEM-EDS analysis with six archaeological samples. The samples with the large calcium carbonate inclusions can be seen top left

Unfortunately, the SIMS data in negative ionisation didn’t allow to distinguish between free fatty acid, triacylglycerol or calcium salt. And while according to literature this is possible in positive ionisation the intensities were much lower than in negative mode (already seen in standards) and therefore too low to derive meaningful data in the samples. Similarly, the aforementioned lipids species have characteristically different IR spectra (which I could easily confirm with standards), but attempts with several very nice people giving me access to their micro-FT-IR instrumentation failed to yield good and diagnostic data from the samples, so the final definite proof for these calcium salts is still to bring.

Our paper now brings the results of this over three year journey together and I hope that others are as excited about this as I am. This work opens up a number of opportunities to directly probe how different pottery types are food preparation could affect lipid distributions and preservations and hopefully will reduce some of the ambiguity and uncertainty that exists in analysis and interpretation of archaeological lipid residues.