Fermented wool is the answer

Fermented wool is the answer

FAU researchers reveal the secret of the famous Pazyryk carpet

Why are the red, yellow, and blue colours used in the world’s oldest knotted-pile carpet still so vivid and bright, even after almost two and a half thousand years? Researchers at Friedrich-Alexander-Universität Erlangen-Nürnberg have now been able to uncover the secrets behind the so-called Pazyryk carpet using high-resolution x-ray fluorescence microscopy. Their findings have been published in the journal Scientific Reports.

The Pazyryk carpet is the world’s oldest example of a knotted-pile carpet and is kept at the State Hermitage Museum in St. Petersburg, Russia. The carpet, which was made out of new wool at around 400 BC, is one of the most exciting examples of central Asian craftsmanship from the Iron Age. Ever since the carpet was discovered in 1947 by Russian archaeologists in a kurgan tomb in the Altai mountains, experts in traditional dyeing techniques have been puzzled by the vivid red, yellow and blue colours of the carpet, which lay buried in extreme conditions for almost two thousand five hundred years.

Red fibres under the microscope

Prof. Dr. Karl Meßlinger from the Institute of Physiology and Pathophysiology at FAU, and x-ray microscopy experts Dr. Andreas Späth and Prof. Dr. Rainer Fink from the Chair of Physical Chemistry II at FAU have now shed some light on this secret. Together, they came up with the idea of imaging the distribution of pigments across the cross section of individual fibres of wool using high-resolution x-ray fluorescence microscopy (µ-XRF). Dr. Späth and Prof. Fink conducted the experiments using the PHOENIX x-ray microscope at the Paul Scherrer Institute in Villigen, Switzerland. With three to five micrometres, the microscope provides sufficient spatial resolution combined with high sensitivity for characteristic chemical elements. 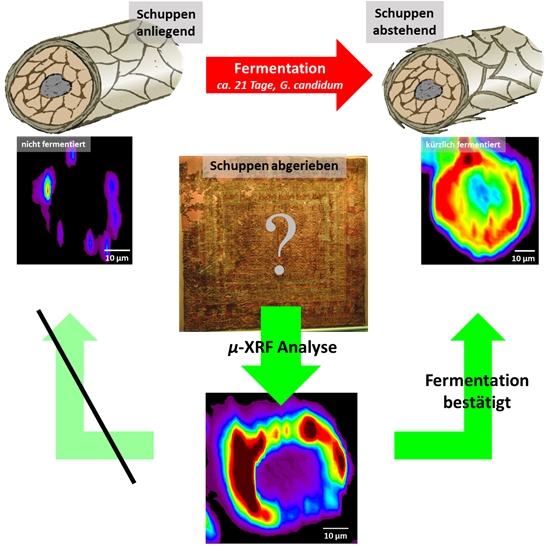 Fermenting sheep’s wool before it is dyed increases the brilliance and longevity of the colour. Fermented wool can be identified by the raised position of the layers of the cuticle along the fibres or by the characteristic distribution of pigments across the cross-section of the fibres. The latter is shown in the x-ray fluorescence images (left). The cuticle layer has fallen off the samples of fibre from the Pazyryk carpet (right). The influence of the fermentation process is still visible by comparing the fluorescence images (bottom) with those of recently dyed samples. Image: FAU/Dr. Andreas Späth

The study focused mainly on red wool fibres, as the pigment Turkey red has been in use almost exclusively for centuries in Central Asia and in the Far East to create a characteristic shade of red. Turkey red is a metal organic complex made of alizarin, which is derived from the roots of the rose madder, and aluminium. ‘µ-XRF imaging shows the characteristic distribution of the aluminium along the cross section of fermented wool fibres,’ explains Dr. Andreas Späth. ‘We found the same pattern in fibres from the Pazyryk carpet.’ This is by far the earliest example of the fermentation technique and provides an insight into the already highly-developed techniques used by textile craftsmen and women in the Iron Age. The results also show the high potential of x-ray microscopy for analysing samples of textiles from archaeological sites. Up to now, research in this field has used scanning electron microscopy (SEM).

Fermented wool does not fade

Prof. Dr. Karl Meßlinger received a sample of some knots from the Pazyryk carpet 30 years ago in 1991 for analysis with a scanning electron microscope. Together with Dr. Manfred Bieber, an expert in oriental textile dyeing techniques, he previously discovered that SEM imaging can identify wool fibres that have been treated with a special dyeing technique based on previous fermentation of the wool. The fermentation process increases the diffusion of the pigments towards the centre of the wool fibres resulting in significantly more brilliant and permanent colours. Fermented wool can be identified by SEM imaging by means of the characteristic raised position of the outermost layers of the cuticle. ‘Traditional Anatolian textile craftspeople are familiar with a less costly yet reliable technique,’ says Meßlinger. ‘They spread the dyed wool out on a field for several weeks in direct sunlight, then put it in a barn as bedding for their animals before rinsing it out in a stream or river. Only fermented wool retains its colour without any significant bleaching.’

Prof. Meßlinger and Dr. Bieber were able to trace the origins of this traditional dyeing technique back to the 17th century. However, the more the treated textile is used or the more it is exposed to the elements, the less remains of the cuticle layers. Most of the cuticle layers of the world-famous Pazyryk carpet were also missing. The researchers succeeded in proving the effect of fermentation by comparing the fluorescent images with those of samples of wool they fermented and dyed themselves.