My main research interests are the following fields:

“Lipids” is a grouping term for a diverse range of different compounds and structural features. It comprises a vast number of compounds with different structures and properties. In fact, in latest efforts, classification is based on eight categories with a total of 84 sub-classes. Some example of common lipids are shown below.

Structures of a fatty acid, a sterol and a glycerophosphocholine

Lipids are in food, together with carbohydrates and proteins, one of the major constituents in food and significantly contribute to the caloric value. In addition to energy storage lipids play a diverse set of roles in metabolism, from essential bile acids, to integral building block of membranes and cell signaling. Many of these properties depend on precisely defined structures, and trying to understand the roles requires an exact knowledge of these. This, however, can be very challenging since lipids can exist in an almost indefinite number of isomers and homologues. For example, ten different fatty acids can be assembled to over 500 different triacylglycerols, many of those sharing the same molecular formula (and hence molecular mass), which makes them difficult to distinguish by mass spectrometry. This is why the analysis of lipids is an equally challenging and exciting research avenue.

Food, both animal and plant-derived, represent very complex systems consisting of a multitude of endogenous (e.g. carbohydrates, proteins, lipids, DNA, vitamins…) and exogenous (e.g. additives from processing, spices, contaminants) compounds. While only 100 – 200 of these are routinely assessed there are over 25 000 different compounds known to occur in food. Considering the plant kingdom alone is estimated to encompass over 200 000 different metabolites the total number of potentially present food metabolites is estimated to be 500 000.

Even only representing a part of this, lipids still comprise a vast number of structures, and many are of interest, for example, due to their dietary value (e.g. plant sterols or tocochromanols) or as markers for authenticity (e.g. wax esters in olive oil). In addition to the compounds occurring native in the food processing and secondary (oxidation) reactions can further increase the number of possible compounds. For example, autoxidation of monounsaturated fatty acids can lead to four major hydroperoxides, which again can react further to several secondary products. Similarly, we previously detected in a vitamin E food supplement capsule over 150 tocotrienol isomers. Only four isomers are naturally occurring, while the remaining were likely a product of improper processing.

These altered structures do not only significantly add to existing structural complexity but also lead to different bioactivities of the individual molecules and health-related properties of the food as a whole. I am therefore very interested in following and understanding the processes that lead to these alterations.

Archaeological Chemistry describes the application of chemical methods for the analysis of archaeological materials, be it human remains or pottery. Within this field I am particularly interested in Organic Residue Analysis (ORA). ORA is based on the prerequisite that traces of food-related molecules can be preserved in archaeological ceramics for thousands of years. 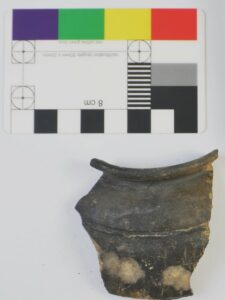 Archaeological ceramic sample that can be analysed for lipid residues

Due to their hydrophobicity (compared to proteins or DNA) lipids are usually considered to survive best. Using techniques such as gas chromatography coupled to mass spectrometry (GC-MS) or GC coupled to combustion-isotope ratio mass spectrometry (GC-C-IRMS) the molecular and isotopic composition of these preserved lipids can be used to infer the original vessel contents. This can, for example, be used to track the dispersal of dairying in prehistory. Due to mixing of resources during use and microbial and abiotic processes after deposition the lipid patterns found in archaeological samples can be very complex, comprising several hundreds of individual compounds.

My research in this field has previously focused on the development and application of cereal-specific lipid biomarkers (NERC-funded project: Palaeolipidomics: A new biomarker approach to trace cereal agriculture in prehistory, PI Dr. Lucy Cramp, University Bristol). We could show that alkylresorcinols and plant sterols, well known minor lipids in cereals can be absorbed and preserved in archaeological ceramics and provide a means to detect prehistoric cereal processing.

A further research interest of mine  is the advancement of analytical methods in archaeological chemistry, and particularly the opportunities that high resolution mass spectrometry offers for comprehensive lipid profiling of archaeological samples. Furthermore, improvements in ( semi-automated) data processing means that not only larger data sets can be efficiently processed but also improves the data that can be derived from individual samples.

Analytical Chemistry, choosing from a vast number of available techniques, allows to detect, identify and quantify individual compounds or mixtures. Particularly the combination of chromatographic techniques with mass spectrometry and similar techniques creates an extremely powerful tool for not only the separation of complex mixtures into their individual constituents but also to identify and structurally characterize these. When high resolution mass spectrometry with accurate mass capabilities is used, even possible molecular formulas can be calculated from the measured molecular weights of even minute amounts of samples.

My current interest is the application of these techniques to achieve the most comprehensive analytical description of lipids in food possible. For this I am using both gas and liquid chromatography, (high resolution) mass spectrometry and ion mobility spectrometry. Particularly for highly complex samples the combination of different techniques and separation dimensions is key to achieve the separation and identification of key compounds. 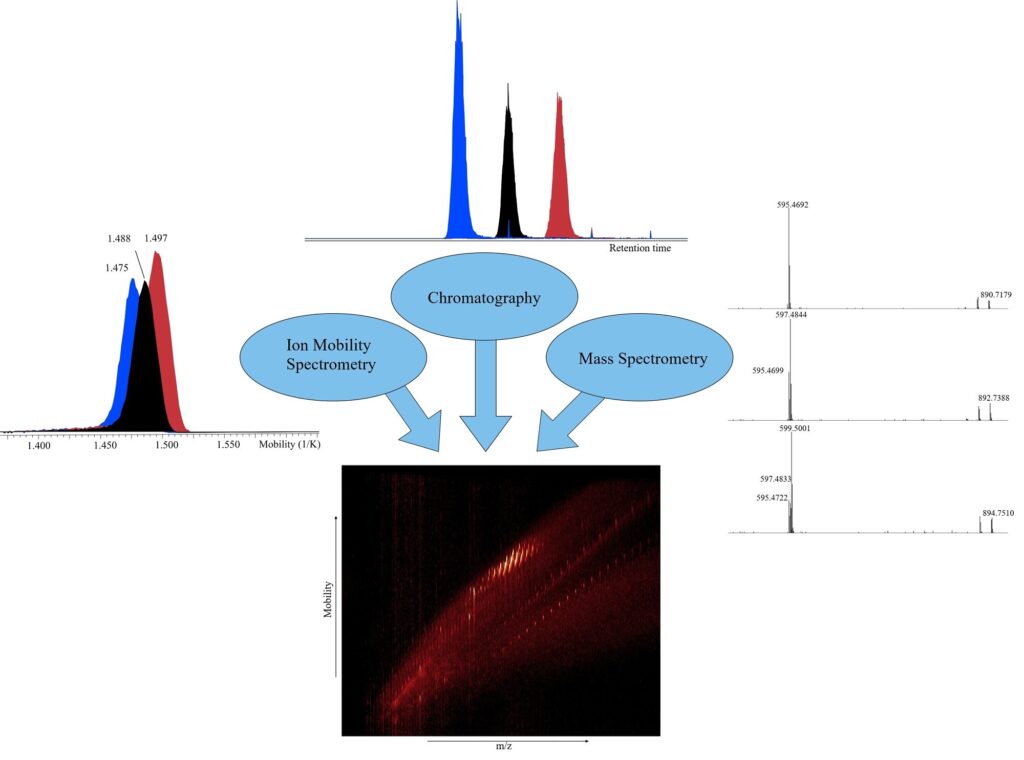